Well established and highly successful, the OM Sailing Club competes every year in The Arrow Trophy amongst other events. Join this group for all the latest news and events.

Match Racing, it’s a different beast. Two boats head-to-head. High octane sailing with aggressive pre-start manoeuvres and no quarter given. An intimate understanding of the race rules is crucial for success.

The venue was Queen Mary Reservoir on the outskirts of London. Formally opened by King George V in June 1925, at the time it was the largest reservoir in the world. The expanse of freshwater covers 707 acres and is 45 ft above the surrounding area, ensuring consistent breeze and plenty of space for racing. 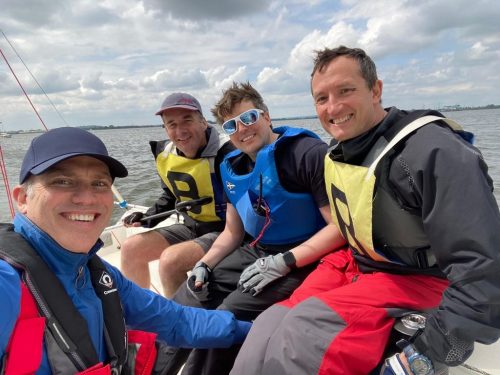 The day did not start as planned, with our skipper testing positive for Covid hours before the event. After a somewhat frantic exchange of early morning WhatsApp messages, an able deputy was found. With thanks to Alastair Fry for stepping in for Mike Orange (PR 1986-91)

The format was a round robin series, with two races against each of the three other boats. When the signal is given in the start sequence, the two boats enter the pre-start “box” from opposite ends, and battle commences to establish right of way and best position on the start line. The crews then race two laps of the upwind – downwind course.

Losing our helm was a cruel blow, but our stand-in skipper stepped up to the plate and did us proud. Unfortunately, we were first up against the hot boat from Winchester. A baptism of fire ensued. The Wykehamists were sharp and aggressive. We got pinned in the box early and incurred a slew of penalties. The race was over before it started.

Wellington were up next. The racing was close, with both boats forcing penalties. A narrow loss but respectable. The cobwebs were well and truly blown away and we were on an upward trajectory.

The third race was against Alleyns. Good boat-on-boat tactics ensured we were well placed at the start. Boat speed was good but the wind was light and shifty. Slick teamwork on the kite downwind made the difference. A win!

The rematch against Winchester was a much more even contest. A game of cat and mouse in the pre-start gave our opponents the advantage upwind. We clawed back some ground downwind but the gap was too much to close. Afterwards, the opposition commented on our rapid progress and that our second race was their most interesting pre-start of the day.

The remaining second round match ups went as before, leaving Marlborough in a best of five shoot out with Alleyns for 3rd place overall.

Going into the shoot out, we felt good. The team was working well together and we were fast. Our pre-start tactics were on the money, and we put our opponents under pressure from the get-go. We got a great start and extended our lead over the two laps. Off to a flyer!

Emboldened by our first race, the next pre-start from both boats was boisterous! Penalties were traded, cancelling each other out. Alleyns just got ahead and closed out the race. One apiece.

Marlborough were not to be thwarted though; we were in the groove and sailed a strong race to bounce back with another win. We just needed one more win to seal the victory. It would have been far too easy if we’d done it with a race to spare though.

The fourth race was tight. We rounded the windward mark first and stretched our lead downwind. Our boat handling and kite work were making the difference. We led both laps but thanks to softening breeze, we were caught on the line.

So it was down to the wire, winner takes all, in the final race. The pre-start was cagey but we got a good start and carried our boat speed upwind. Downwind, sharp spinnaker work and smart tactics made the difference. We crossed the line with a comfortable lead to secure 3rd place overall.  All in all, a great day’s competition with a lot of fun had by all.

The team would like to thank the organisers, the Royal Thames Yacht Club, for putting on a fantastic event and for providing congenial umpires who took the time to de-brief the crews and share learnings. Our thanks and congratulations also extend to Queen Mary Sailing Club, for hosting the event on the club’s 50th anniversary.

Thanks to the OM Club’s continued support and generosity, the OM Sailing Association is going from strength to strength, bringing OMs of all ages together, on and off the water, to enjoy some great racing and camaraderie. Bring on the Arrow Trophy in October!

Having sailed into the sunset with the Charterhouse Bowl after three action packed days on the water in 2019, the Old Marlburian Salling Association (OMSA) had a hard act to follow this year, dusting off their cobwebs as well as a fair amount of encrusted saltiness from lack of time on the water since our last outing.  There was a focus to raise a diverse and competitive crew for the re-emergence of this highly regarded regatta after a year’s COVID hiatus, bringing in the energy of youth, whilst retaining the steeliness that comes with the experience of age.

The bugle sounded and the crew congregated at noon the day before racing at the Sunsail Marina where we were allocated “Raymarine Simply Superior”, one of 12 new yachts in a split fleet of two classes from Sunsail’s reconfigured offering.  Friday afternoon was spent getting used to our vessel allocation with a series of impressive nautical manoeuvres carried out in fast repetition under the steely eyes and calm demeanour of our helmsman, Mike (Jaffa) Orange, until all roles had been allocated and all foreseeable tacks, jibes, hoists and pole configurations mastered.  Therefore, it was with some satisfaction that we made Cowes as the sunset over the West of the Isle of Wight, a clear but diminishing blue sky, heralding the end of an afternoon well spent.  Further tactics were discussed over salt and pepper squid, rump steaks, and Rose´ in the aptly named, “Mullets” restaurant before we moved on to size up the competition at the Royal London Yacht Club where the race committee had organised their “Dark and Stormy” happy hour. We retired to our hammocks smiling, with sliplocks and winches well-oiled and ready to go…

Sadly, the choice of cocktail the previous evening brought not only lingering mist to sore heads, but the portents of a lively day on the water.  Race instructions were issued early and annoyingly all our spinnaker practice the previous day lay in tatters due to the forecast as the order was circulated for “2 main reefs and no kites” with the high likelihood of racing not lasting past mid-day.  Our intrepid crew were disappointed by the curtailing of competition to starts with winds of less than 25 knots. We only managed to get two races completed before competitive sailing was officially called off for the day, having had one vessel retire with irreparable damage and several other boats limping home, of which we were one, with a damaged spinnaker pole car, having watched various bearings, nuts and bolts fly off into the deep following one sudden and ferocious gust hitting our goose winged fore sail.

Having returned to the Marina with our pride in a better condition than our boat, we found out that due to the weather Sunsail were refusing to service their vessels anywhere but their own moorings, on the far side of the Solent.  Not Ideal.  After a jerry rig repair, we retired to the comfort of our crew house tucked just behind the Anchor Inn on West Cowes High Street for a debrief, drying out and hot cocoa.

Feeling reenergised, we dolled up, compared the variety of OM ties on display and trooped off for a team ale at the Anchor before the regatta dinner at Cowes Yacht Haven. One highlight of the evening was being joined by Bob Milner (C1 1956-61) of The Arrow race committee. Bob, a former OMSA helmsman for previous Arrow Trophies and authority on The Solent, always provides helpful advice and encouragement. Following an excellent dinner there were the usual good humoured exchanges with the 20 or so other schools represented.

Sunday morning saw the loss of Karen to the RedJet, not a result of her baptism of fire, but due to previous appointments that could not be cancelled at short notice.  Though in slightly lighter winds, the morning’s instruction briefing was met with similar sailing orders to the previous day and the second Sunday race was cancelled. Refusing to let circumstances get the better of us, and in true OM fashion, the crew kept their humour up throughout.

All in all, and despite the strong winds and set-backs, it was a fantastic event, thoroughly enjoyed by all, with a broad variation of ages and skills on display.

A special thank you to all those who worked behind the scenes to make this the event it was and to the OM Club for their support.

The Old Marlburian Sailing Team won the Charterhouse Bowl for Fleet Sailing at the Arrow Trophy in October 2019. The Arrow Trophy is a sailing competition between independent schools, raced as an annual weekend regatta, in one-design yachts crewed by former pupils. The organising authority is the Royal London Yacht Club and the race format is short fleet racing on Saturday, finishing up in Cowes in the late afternoon.

The top four teams from the fleet races then go into a series of match races on Sunday to determine the overall winner for the Arrow Trophy, whilst the remaining competitors fleet race to determine the winner of the Charterhouse Bowl.

The event takes place on the challenging waters of the Solent, aboard Sunsail’s fleet of F40 yachts.