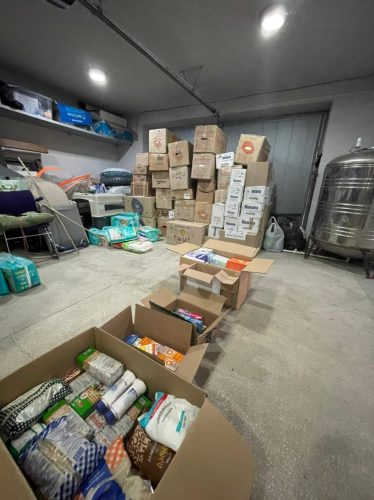 Three days after the war started in Ukraine, the wife of the Ukrainian Ambassador to Georgia invited members of the International Women’s Association (IWA) and of diplomatic missions to her house in Tbilisi. Catherine Brumwell (née Redpath NC 1991-96), as wife of the British Defence Attaché, was one of those invited. During what was a “highly emotional” meeting, the group agreed to help rally the international community into helping with humanitarian and financial aid. Just over 24 hours later, they launched the programme.

Catherine offered her house which has a large garage in central Tbilisi as a collection point. Alongside the two Ukrainians she had living with her, a team of volunteers, and the IWA, she has since collected in the region of 80 tonnes of humanitarian aid.

It was quickly discovered that there were around 140 Ukrainian trucks stuck in Tbilisi and all the drivers were desperate to get back home to defend their country or rescue their families. They agreed to take the aid for free but the cost of fuel, road tax, and food for the driver still needed to be covered costing $2,300 for each truck.

Catherine put out a message to all her contacts and has raised nearly £8,000. This and the many other donations meant that as of 23rd March, 17 trucks have already arrived. 7 trucks are on their way in Bulgaria and Romania and 3 trucks are waiting to go.

The work has not stopped, as aid is still needed and there are still many trucks waiting to go. Catherine is continuing to approach companies to get finance, supplies, and volunteers. She said:

“Things happened, evolved, and changed very, very quickly. It went from offering my garage to planning a campaign launch in 24 hours. Within a few days, we were working 10-11 hours a day sorting and packing. The response was extraordinary. Seven special-needs schools in the east of the country collected 30 boxes of a local delicacy called chuchkhela, one man arrived with 30 boxes of US-military ration packs at a value of $250 each, and one international school came with over 40 boxes of aid. At the other end of the scale, I’ve had people drop off a bag of pasta or a shirt they felt they could do without. These people have touched me the most.

“One of my most humbling moments was at 9pm one evening. Six trucks were packed and ready to go and I went to the truck park to help sort the paperwork and to physically hand over the cash to the drivers. Four drivers were going back to fight for their country and the other two were to rescue their families. There’s a phrase in Russian that is similar to our ‘all the best’. I’ve said it in passing many times but this time, as I shook each of their hands, I’ve never meant it more.”

“Georgia feels this invasion very strongly as they were invaded by Russia in 2008. Everyone here wants to do all they can to help as the international community helped them then. The big problem now is keeping the momentum going, but we are increasing our contacts and the delivery of our message, and we hope to carry on at the same level for as long as Ukraine needs us to.” 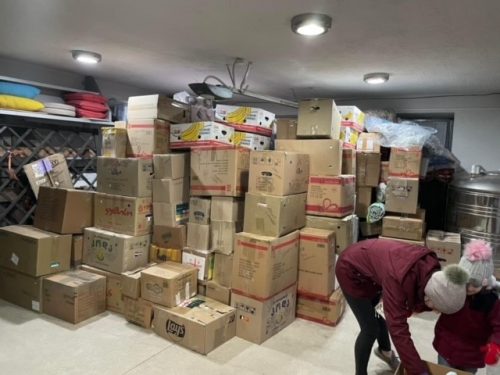