Why not do both: fifty years on from dinner in the Athenaeum on Tuesday 9th November 1971

In Michaelmas Term 1960, JW Seamer looked at 21 boys doing Latin in Shell b and told us that, unless we got out of the Shell at the end of that term, we would not get to university! One small, very immature and untidy boy felt that Jake Seamer was looking him straight in the eye and I duly scraped into Remove e for the following term. 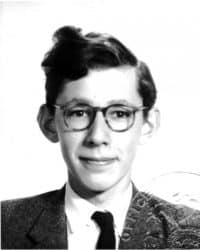 Marlborough was about far more than getting into university – there was sport (I was no good at that); there were Scouts and the CCF; there was, for me, lots of music and worship and G Barton’s wonderful art appreciation that also taught me to take a fresh look at streetscapes. At home in the holidays, we had a relatively new game produced by John Waddington called Careers. The object of the game was to succeed but, just as in real life, each player could have their own idea of what success means. In A2, IDS Beer wanted us each to have a hobby; in C1, WH Spray, with a Croix de Guerre as a Quaker ambulance man in World War II, challenged me to be courageous. However, after a year getting Certificate A in the CCF, I moved into social service and a lovely blind lady in the town taught me Braille.

There were inspiring teachers like Dr FR McKim in Physics, DA Quadling in Mathematics and LE Ellis in Applied Maths. who inspired me to win the Bedford mechanics prize and to head for engineering. However humanity drew me to a multi-disciplinary career and, with DRW Silk’s support, I was keen to leave at 17 and to read first Engineering Science and Economics and then Jurisprudence at Oxford. That meant passing Use of English (having failed with an even lower grade on my second take) and an amazing Lent Term that included coaching with LAL MacKichan, one to one tutorials with the Master, JC Dancy and law with my fellow bassoonist in the orchestra and Registrar, RAU Jennings.

Although Spray was a Quaker, his challenge did lead me to the Officer Training Corps, whilst what Silk had called my outrageous politics – I had keenly supported Liberal Michael Fogarty in the two elections in 1964 after Devizes MP Percivall Pott had died – led me to being a National Union of Students Secretary and later President of the Junior Common Room. In that first year of university, I was also challenged that, if I believed in Christ, I should take following Him seriously.

Suddenly many of my generation at Oxford were becoming ordinands; as EH Burn, my law tutor put it, the only question is: “Do you love people?” adding that it wouldn’t matter what I did before 30 “Just get some discipline”. At St Aldate’s, the Rector, OM Canon Keith de Berry, was a potent influence in my training an Anglican Reader, admitted by Bishop of Oxford, Harry Carpenter, who had confirmed me at prep school and who was about to retire; when the congregation of St Leonard’s Shoreditch (used in the TV Series Rev) prayed for a curate, they got me as a Reader whilst I trained for the Bar and worked with patent agents, Boult, Wade & Tennant.

Carpenter’s successor as Bishop was Kenneth Woollcombe; he, before me, had also studied engineering science at Oxford and later been released from a combatant role in the Royal Navy to train for ordination. Woollcombe invited me to dine at the Athenaeum on the evening of Tuesday 9th November 1971. As I crossed Waterloo Place, the thought running through my mind was that the Bishop would decide between the intellectual property bar (at the time my one concept of combining engineering, economics and law) and taking up an offer to read theology at Oxford or Cambridge and then becoming a conventional clergyman.

The Athenaeum seemed deserted; strikes meant that it had no oil for its heating; only two tables were dining – ironically the other table was being hosted by a Law Lord – and, over coffee before an open fire, the Bishop asked, “Why not do both?” My church selection conference had recommended that I train not, at Oxford or Cambridge, but somewhere where I would hear views expressed that I did not already hold; and so I embarked upon the Southwark Ordination Course that OM Bishop John Robinson had helped to found; Robinson had shared a study with my father, F Scott, just as I had shared a study with his son, SJ Robinson.

The Hebrides had a significant part to play – not just military work in the outer Hebrides and family visits to Skye, but an invitation from Ian Reid to the Iona Community; so I met a lady from St Andrews who suggested that I meet her younger daughter, Oona, who has been my wife and wonderful companion since 1978; when we met she was rehabilitating brain injured servicemen at RAF Chessington but later became a Professor of Neuro-physiology. Shortly after we married, one of Oona’s friends married H J P Keighley in St Margaret’s Westminster – spotting most of the Common Room in the congregation, a wave of guilt struck me for being there with a girl after the Master’s talk on the slippery slope with girls when I was at school.

In 1974, I moved to St Michael’s, Blackheath Park, SE3, where my vicar for 19 years was an OM David HF Shiress, and where I am still an assistant minister. On ordination, I joined a chapter of priest-workers that reinforced the concept of being a minister of God’s Kingdom – the Kingdom is frequently mentioned in the Gospels whereas the church gets only one mention. Instead of conventional post-ordination training, I studied part-time for four years at City University, writing pieces on the church, on the psychology of people in their roles under stress, on the computerisation of meteorology in the Army and then a dissertation that focused on the strategic exploitation of technology in the telecommunications industry.

1974’s oil related downturn had a severe impact on the intellectual property bar – I had three job offers and chose ITT, the US based multinational parent of Standard Telephones & Cables, who created a role around the results of their psychometric tests; the UK had joined what became the European Union, I became engaged with competition and communications laws and with regulatory economics moving to the Post Office that then ran nationalised telecommunications and enjoying digital transformation, the creation and then privatisation of British Telecom, its international affairs and latterly chairing its apparatus business until 1994.

Along the way, I had to pause my reserve military activities – as part of the Royal Artillery’s Specialist Pool, I had been embedded in 94 Locating Regiment; building on the surveying that I had learnt at Oxford and being a target acquisition specialist as well as a trials officer for unmanned aircraft and communications; I ended up commanding the meteorologists. The combination of military experience and telecommunications led to being a Chartered Engineer and a Fellow of the IET. Whilst the addition of behavioural sciences and law, led to work on economic regulation in the EU and specially in Ireland.

My wife, born and educated in St Andrews, and membership of the Government/Industry Group in the Strategic Planning Society both provided a connection to the University of St Andrews where I had fellowships (1994-2012), initially on secondment from BT; for a multi-disciplinary individual, St Andrews, with its range of disciplines led on to teaching – a great opportunity to learn, to becoming an accredited teacher and a researcher with a PhD looking at how people use scenarios to consider the future and to some fascinating consulting opportunities.

In 2000, when the UK decided to create a specialist Tribunal, now the Competition Appeal Tribunal. I applied as did 800 other people including Professor Peter Grinyer with whom I was sharing an office at St Andrews; we were both appointed and, apart from hearing cases, I developed a strong engagement with training and with the Association of European Competition Law Judges that has led to being Director of Studies at the Tribunal, looking after training and European and international affairs, travelling to a variety of universities and judiciaries in Europe and beyond; my Inn of Court, the Inner Temple, recognised this in electing me as a Governing Bencher in 2020. 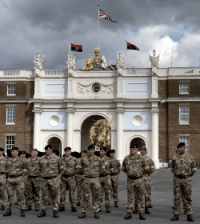 After retiring as a Gunner officer, I stayed in touch with the Regiment and with Defence Surveyors and, in 2015, I was asked to come back, this time as Anglican Officiating Chaplain at Woolwich Station and to the National Reserve Headquarters, Royal Artillery; it is a delight not only to be amongst Gunner reservists but also the All Arms Staff Pool with a tremendous variety of cap-badges and of experience.

My parents had a strong sense of public and charitable duty coupled to their Christian faith and regular worship; Marlborough reinforced those values. Christ Church nominated me to join the committee of its settlement in Kennington, the Oval House then a radical youth club with a great work in drama and race relations spearheaded by Peter Oliver, now Brixton House – it was to be the first of several charities. In 1846, my great great grandfather, Dr Henry Monro, was physician of a mental hospital in the days when such hospitals, work houses and debtors’ prisons were doing little to rehabilitate individuals; his compassion was an inspiration for a charity now known as the House of St Barnabas in Soho which still works to rebuild lives whilst being steward of two Grade 1 listed buildings; I arrived in time to work on Crossrail – Crossrail 1 is now beneath the House (1678) and Crossrail 2 is due to go under the House and its Chapel (1862) in due course. I am still custodian of its Chapel which hosts London’s Macedonian Orthodox congregation and the House runs not only a members’ club but an employment academy for homeless people. The West End has a vibrant, international and ecumenical, group of clergy and, for 2020/21, I have been chaplain to local Councillor Jonathan Glanz as Lord Mayor of Westminster – not an easy time with the pandemic constraining activities.

Epilogue
On 14th January 2012, Oona and I were in Preshute Church to give thanks for Dr McKim’s life, as my former Scout Master, WM Dain gave the eulogy, my mind went back to being driven to Capel-y-ffin by JH Isaacson and it occurred to me, how patient the two of them were, eating what we scouts cooked over, and sometimes in, our open fires and biscuit tin ovens. Sometimes the kingdom is quietly built by such faithful service.