Nothing tickles the willow quite like the sight of a perfectly prepared track after months of lockdown. Sunday was no exception, with the Blues taking on the Eton Ramblers on a wicket that wouldn’t have looked out of place on a televised day 1 Ashes pitch inspection down under.

Due to an ominous late afternoon weather forecast the two captains decided on a 35 over limited overs match. Rather light on bowling, Stuart Swift (C2 2007-12) won the toss and elected to bowl, backing his heavily stacked batting line-up to chase down anything Eton set.

George Strang (BH 2004-09) and Joe Lloyd (SU 2012-17) opened the bowling and right from the first over posed a constant threat, beating the outside edge regularly and moving the ball a considerable way. As pressure built and an increasingly large chunk of the available overs started to disappear for little return the batsman were in trouble. Then in a moment that would make any bowlers summer Joe Lloyd got one to move back in and clip the very top of off. The batsman first leaving the ball then the crease. Joe would pick up two more before the end of his seven overs to finish with impressive figures of 20-3. George providing the pressure from the other end in a fantastic opening spell.

Dom Brown (C1 2007-12) and Magnus McGriggor (C2 2007-12) took over the reigns and bowled beautifully, with Dom bowling his full 7 over allowance right through. Magnus Bowled with surprising speed and vitality for a man who used to bowl spin picking up two excellent wickets.

Eton began to claw it back through a solid mid order partnership, before a drinks break broke their concentration and both batsman kindly redirected two Dom Brown deliveries down the throats of the only two leg side fielders, Joe Loyd and Alex Combe (PR 2010-15), who happily obliged. 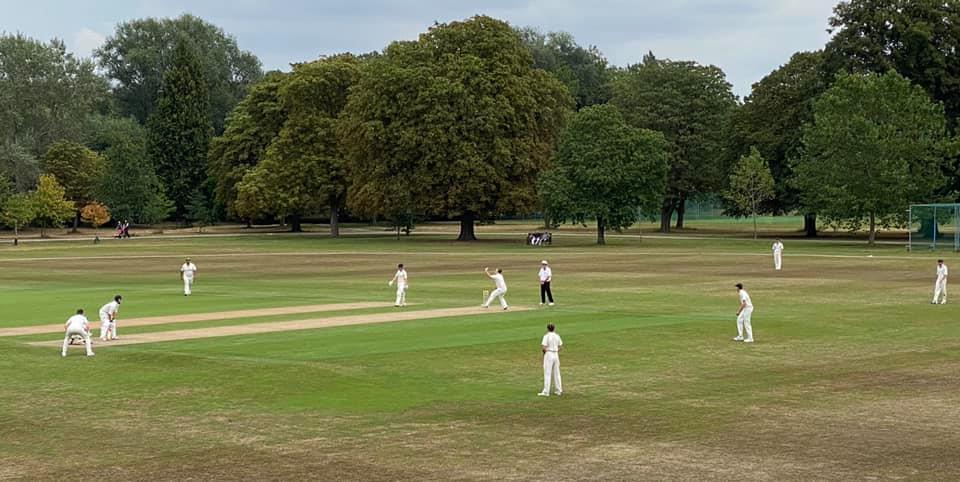 The tail was then mopped up by the remains of the opening bowlers overs and some outrageous leg spin from Will Davies (C3 20012-17), who was turning it so far he explained it actually hindered his bowling. Eton finished on 171 all out, which looked very gettable considering the wicket and calibre of batman the Blues were fielding.

Victor Kandampully (SU 1998-2003) and Alex Combe confidently strode out after a shortened tea break, with clouds threatening rain. And clouds remained the only things that threatened in the hours that followed, with both batsman showing clear signs of people who, despite the pandemic, have already chalked up some serious time at the crease this year. Combe was eventually dismissed for 57, while Victor would carry his bat right through to the end, finishing unbeaten on 70. Will Fremlin-Key (C2 1998-2003) was unlucky to be adjudged LBW, before Sam Christie (C1 1995-2000) finished the job off at the end with 34 not out.

All in all a great 8-wkt win, and a welcomed continuation to a fine run of form for the Blues.